Palladium is poised for a sustained bull run.

Platinum and palladium are both used as catalysts in vehicle emissions control devices — catalytic converters.

They create a reaction that oxidizes or reduces toxic pollutants in exhaust, namely poisonous gases nitrogen oxide and carbon monoxide. They're interchangeable with each other as the main catalyst in the converters.

There is no substitute for these two metals. Automakers MUST use either platinum or palladium as catalysts.

So when one metal gets too expensive, the auto industry simply replaces it with the other.

It’s a cycle that repeats every couple of years, creating a platinum/palladium seesaw.

Between 1990 and 2001, the global automobile industry favored palladium over platinum as the main catalyst. 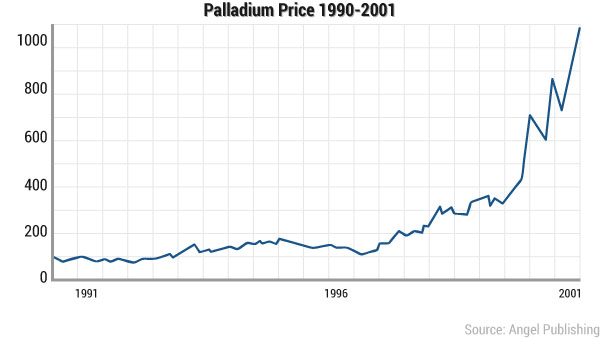 Take a look for yourself: 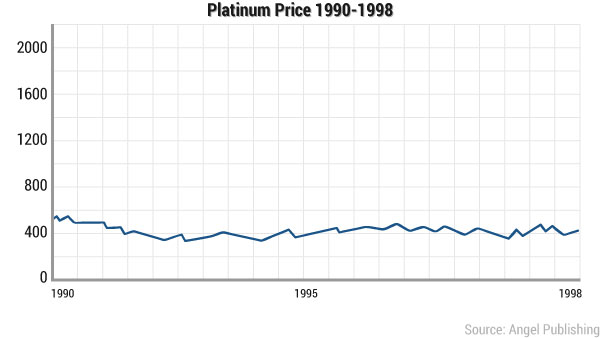 Then, with palladium prices over three times higher than platinum, global automakers retooled their catalytic converters with platinum.

And again — after only seven years of strong demand from the auto industry — platinum prices were driven 597% higher to $2,273 an ounce: 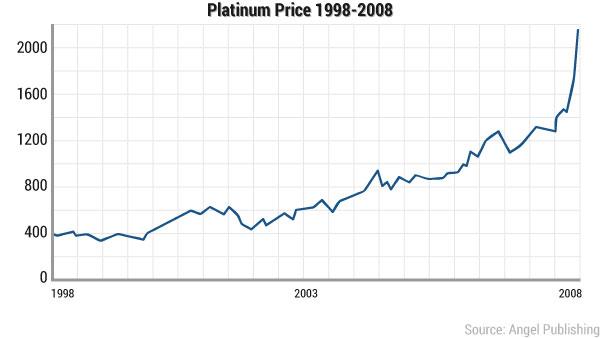 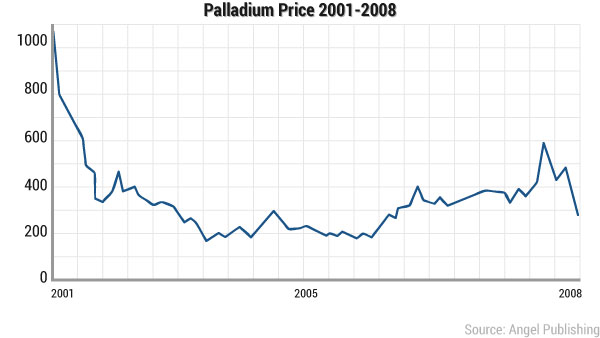 You get the point...

When the price of one metal becomes too high, automakers send it crashing down by switching to the other. After switching, prices of the other metal begin to rise with demand from the auto industry.

That means the very best time to be invested in platinum or palladium is when global automakers are retooling their catalytic converters to use one or the other.

In 2009, the demand for platinum usage in auto catalytic converters dropped 39%.

As expected, platinum prices have fallen 47%.

Palladium's outperformance has been driven by the strong rebound in the global auto industry, particularly in the U.S. and China.

And while palladium's rally over the last few years has been impressive, we ain't seen nothin' yet...


More than half of annual worldwide palladium supplies go into the production of autocatalysts.

As such, palladium demand is correlated to the health of the global auto industry, which has come roaring back since 2009.

In 2013, sales in the U.S. topped 15 million vehicles, the highest the industry has seen since 2007. China became the first nation in the world to sell 20 million vehicles in a single year.

And despite the fact that China achieved world-record-breaking car sales in 2013, its car ownership rate is still just 1/8th the rest of the developed world.

Overall, global light vehicle production is expected to increase 25% through 2021, according to the Financial Times. China will account for 30% of that growth.

As the auto industry continues its rebound, the demand for palladium will increase with the growing demand for catalytic converters.

And with the global auto industry's switch well underway, the demand for palladium will scream higher over the next several years.

Here in America, we’ve had catalytic converters standard in every car since the 1970s.

But in the world's largest auto market, China, they've only recently been made mandatory.

And that means more and more palladium will be used up.

According to Rick Rule, chairman and founder of Sprott Global Resource Investments, “The Chinese government has proposed air quality standards over five years that would quintuple the loadings of palladium in gasoline engines in China.”

But the world's palladium resources are extremely limited... and getting scarcer by the day.

Russia is the number-one source of Palladium.

It accounts for more than 40% of the world's supply. But geologically, the ore grades of Russian mines have been in steady decline.

As a result, they've been dipping into stockpiles to fill orders.

And some analysts believe Russia has sold off almost all inventory.

“We believe Russian palladium stocks — built up during the cold war — are greatly diminished and may be nearing exhaustion,” says James Steel, precious metals analyst for HSBC.

Not to mention that with its recent invasions of Ukraine, Russia is a complete wild card. Geopolitically, it can cut off exports any time.

South Africa is the only other major source of Palladium.

But it has been riddled by mining strife, and recently endured the longest mining strike in its history. All mines operating there were shut down for five months.

And although the strike just ended, it's not like flipping a switch...

As the Wall Street Journal says, “The end of the strike doesn't mean an automatic restart of mining. Full production could take around three months. And there's a risk that South African labor tensions may flare up again.”

In a Merrill Lynch Global Research report, analysts wrote, “We expect further shortfalls, as miners will increase production slowly after the five-month strike.”

These supply disruptions and shortages are all occurring at a time when demand for Palladium couldn’t be higher, which is why I believe higher prices are coming for it and related equities.

And that's why now is the time to stake your claim in the sector.

"Because gold is honest money, it is disliked by dishonest men." - Ron Paul

But Palladian is up and platinum down. What am I missing?

Can anyone here speak from experience? Have you ever tried to sell, palladium? Is it liquid? Is the spread horrendous? Do LCS buy it? Do you have to sell to refineries? There's a hundred questions right off the top of my head. I could be way off base, but I can't imagine it's as easy as gold or silver.
S

JayDubya said:
Can anyone here speak from experience? Have you ever tried to sell, palladium? Is it liquid? Is the spread horrendous? Do LCS buy it? Do you have to sell to refineries? There's a hundred questions right off the top of my head. I could be way off base, but I can't imagine it's as easy as gold or silver.
Click to expand...
I bet you could sell it here quickly if listed for spot minus 10 or 20.

JayDubya said:
Can anyone here speak from experience? Have you ever tried to sell, palladium? Is it liquid? Is the spread horrendous? Do LCS buy it? Do you have to sell to refineries? There's a hundred questions right off the top of my head. I could be way off base, but I can't imagine it's as easy as gold or silver.
Click to expand...
I've never bought or sold palladium, but I see on Coininvest (a reliable supplier with the business office in London and metal in Germany) that they have none to sell at present, but show a buyback price which (using the GB£) is slightly higher than spot for a 1oz Maple Leaf.

http://www.coininvest.com/en/search/?search_text=palladium&change=1&curRate=dollar_rate
"Any fool can criticize, condemn and complain and most fools do."
Benjamin Franklin​

APMEX Buy Price*: $773.40
Are indications only for transactions of $10,000 or more. Buy prices will be less for smaller trades.

JayDubya said:
Can anyone here speak from experience? Have you ever tried to sell, palladium? Is it liquid? Is the spread horrendous? Do LCS buy it? Do you have to sell to refineries? There's a hundred questions right off the top of my head. I could be way off base, but I can't imagine it's as easy as gold or silver.
Click to expand...
It's really not much of a problem. I think you need to view it a little differently. Buying and selling from reputable online sources is not a problem, it's probably not an lcs thing though. I don't think very many people collect palladium like they would gold and silver. It's pretty much pure detached investment.
M

Mr.Jens said:
Anyone buying palladium?
Click to expand...
i am.....but its mostly because i am buying PT.......i like to keep a 50/50 balence mix of PT and PL.....personally i think PT is a much better value right now that PL

Mr.Jens said:
Anyone buying palladium?
Click to expand...
Who is this Palladium you speak of? :)
'I pledge allegiance to the flag of the United States of America; and to the Republic, for which it stands, one nation under God, indivisible, with liberty and justice for all!'
(except in California, New York, New Jersey, Michigan, Illinois, Massachusetts, parts of Oregon and WA state, and all of Washington DC)
http://chuckmaultsby.net/id145.html