mind you, this is after last weeks report showing gas supplies being drawn down, while crude supplies were up again, 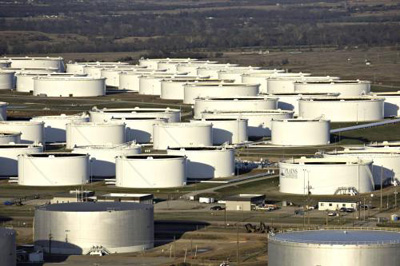 One week ago, we reported that even as traders were focusing on the daily headline barrage out of OPEC members discussing whether or not they would cut production (they won't) or merely freeze it (at fresh record levels as Russia reported earlier today) a bigger threat in the near-term will be whether the relentless supply of excess oil will force Cushing, and PADD 2 in general, inventory to reach operational capacity.

As Genscape added in a recent presentation, when looking specifically at Cushing, the storage facility is virtually operationally full (at 80%) with just 4-5 more months at current inventory build left until the choke point is breached, and as we have reported previously, storage requests for specific grades have already been denied.

Goldman summarizes the dire near-term options before the industry as follows:

The large builds in gasoline and crude stocks have brought PADD 2 storage utilization near record high levels. While the recent decline in Midcontinent refining margins should help avoid breaching storage capacity, by finally bringing gasoline back into deficit, this will likely only exacerbate the build in crude inventories in coming months and should require further weakness in PADD2 crude prices to spread this build to the USGC. Weaker gasoline demand/exports, or higher margins/runs or finally resilient crude imports/production, could create binding storage issues beyond the intermittent Cushing WTI cash price weakness observed so far, which would require another large leg lower in crude prices to shut production in the Midcontinent and Canada. As we have argued, this continued testing of storage constraints should keep price and margin volatility elevated.

However, while the threat from overproduction on soaring crude inventories, or in other words "supply", has been extensively documented, far less has been said about another just as big problem: "demand", or the potential supply-chain bottleneck that will hit the moment refiners finds themselves flooded with too much unwanted product, in turn telling producers they have to turn oil back simply because they have no more capacity.

Is this possible? It's already happening.

As the WSJ reports in a piece titled "The Big New Threat to Oil Prices: A Glut of Gasoline", refineries in the U.S. Midwest are losing their thirst for oil, posing a new risk for the battered crude market. The Midwest accounts for nearly a quarter of the crude processed in the U.S. and is home to shale producers that have few other outlets for their oil. But refiners there are already swimming in gasoline and other fuel, forcing them to cut back production until the excess can be worked off.

In other words, not enough intermediate demand in the supply-chain with the result the same as oversupply: more crude oil is available in the market, worsening a glut that has been undermining oil prices for the past year and a half. As the WSJ adds, "with U.S. crude inventories at the highest level in more than 80 years, some storage hubs have little room left to store oil."

This means that storage hubs are now being hit on both sides: from excess production in a global market oversupplied by 3 million barrels daily, and from collapsing demand by the refiners for whom operating at current prices has become uneconomical. The result is that refinery production capacity, while already running at record levels for this time of the year, has tumbled from 98.2% a month ago to just 92.9% last week.

This drop is significant because, as the WSJ explains, it marks the first time several refineries in the region have opted to reduce activity for economic reasons— a marked change after more than a year of refiners processing as much crude as possible.

Here is the problem illustrated: gasoline stocks are literally off the charts in terms of the past 10 year min-max range: 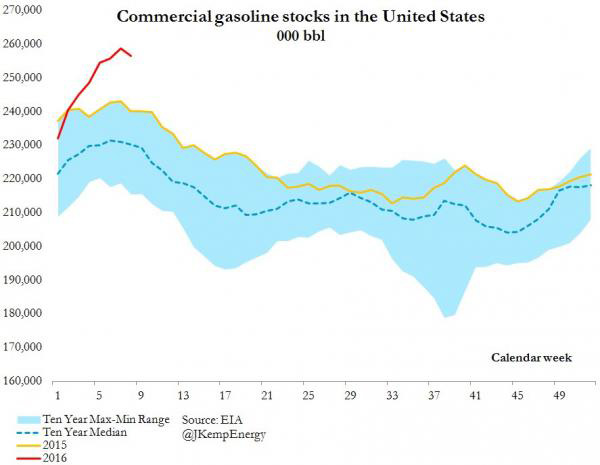 ... as refineries operate at a record pace for this time of the year... 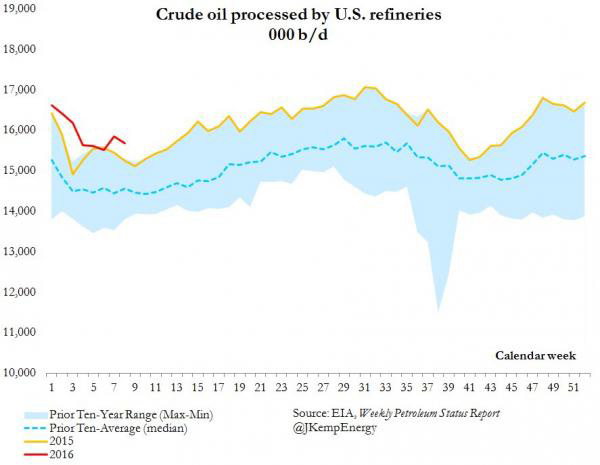 ... while gasoline demand is well within its past decade range: 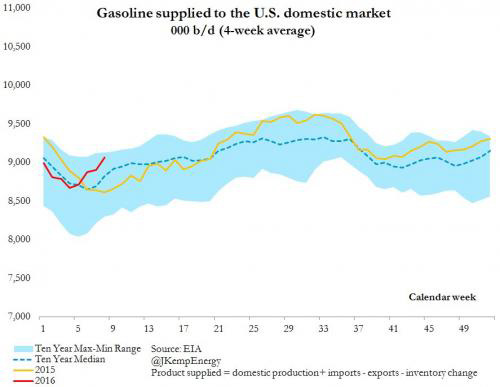 Which means refining production has no choice but to decline, which is precisely what it is doing. Three examples:

The first immediate consequence of overproduction are dropping margins as refiners try to sell their product into a glutted market, and sure enough refining margins are lower throughout the country this year, including in the Gulf Coast region, where more than 50% the country’s refining capacity is concentrated. But refiners there have more choices when it comes to buying crude oil and can substitute cheaper options if they become available. And they can put fuel on tankers to sell overseas if supplies build up too much.

In other areas, there are fewer viable options: recent cutbacks have been enough to nudge gasoline prices higher in the Midwest, though it’s still cheap in some places: Gas was selling for as low as $1.11 a gallon on Wednesday in Granite Falls, Minn., according to Gasbuddy.com. Gasoline futures for March delivery rose 4.6% on Wednesday to $1.0104 a gallon, up from a seven-year low hit earlier this month.

Which again brings us to the most important commercial hub in the US, located in the heart of the Midwest in Cushing, Oklahoma.

"Many industry players and analysts think refiners will ramp up production after spring maintenance and they expect activity to pick up in the summer as cheap gasoline spurs Americans to take more road trips. But for producers in the Midwest and Canada, any decline in Midwest refining activity is worrisome. The region is home to the crucial oil storage hub at Cushing, Okla.—the delivery point for the U.S. oil futures contract."

Sellers in the futures market can either deliver physical crude or buy futures to offset their obligations. A lack of storage space can force buyers out of the market and supplies in Cushing are at their highest level ever. Analysts warn U.S. oil futures could fall further as Cushing nears full capacity.

This is precisely what we have been warning about for months, or as Paul Horsnell, global head of commodities research at Standard Chartered puts it, "There’s a feeling of various bits of ice cracking all at once" in the oil market, with both crude-oil and gasoline inventories at extremely high levels... People are worried about a short-term issue, particularly in the U.S., particularly at Cushing."

The good news is that we are likely very close to the worst case scenario playing out: refiners are unlikely to start buying more crude in the coming weeks. Instead, many will begin seasonal maintenance ahead of the busy summer-driving season. That could leave some oil producers scrambling to find places to store their output. Prices in some regions might have to drop sharply to justify the cost of shipping the oil to where it can be stored.

Which means there are just two options: find some undiscovered storage, or hope demand picks up.

On the first, there is always hope: “we’ll just look for every other nook and cranny throughout North America to stuff crude oil into,” said Andy Lipow, president of consulting firm Lipow Oil Associates in Houston. “The market is just not going to like it."

However, it is the second that is the biggest wildcard: refiners profit on the difference between oil prices and fuel prices. Oil prices have dropped 70% since mid-2014 to around $32 a barrel currently, but robust demand for gasoline kept prices at the pump from falling as quickly last year, boosting refiner margins. However, analysts question whether demand will increase strongly this year, especially given broader concerns about sluggish economic growth.

Which brings us to the punchline: on a four-week average basis, U.S. gasoline demand fell in January compared with the year before, according to Energy Information Administration estimates.

This despite the alleged increase in US consumer purchasing power or the so-called "tax-savings" from low gasoline prices, which should have boosted overall gasoline demand.

Which is why with the market having debated the supply issue for over a year, and overanalyzed the OPEC and non-OPEC supply question to death, what virtually nobody has discussed is the just as important demand side of the equation, perhaps because nobody dares to admit the obvious: the much needed rebound in demand is just not there.

If that is indeed the case, expect a sharp, violent move lower in the price of oil in the coming weeks as the fundamental oil reality finally catches up with the imaginary world of stop-hunting, momentum-igniting, algorithmic daytraders.

94 million amerikans no longer have to drive to that pesky job 5 times a week. But the economy is great right? Right?
"And yeah, you're gonna get wet"~ Jeff Williams

More fuel efficient cars too. Cost me less than $20 to fill up my car yesterday which will go around 350 miles.

Gas going back up around here, about a .20 cent rise in a week.

So there's no market for fuel because it's reached saturation and there's no more storage left. Maybe it doesn't matter what the producers produce or what OPEC wants. If it's got no where to go, they ain't selling it.
​
The market value of precious metals is, as that of all other things, in the compound ratio of their utility and of their scarcity.

It's my guess that all the oil producers are in hock up to their necks.

To much supply causes prices to decline meaning they can't pay debt!


There are too many players in the game.

gringott said:
Gas going back up around here, about a .20 cent rise in a week.
Click to expand...

Define 'around here' Holding steady here in NH @ 1.65 gal
'I pledge allegiance to the flag of the United States of America; and to the Republic, for which it stands, one nation under God, indivisible, with liberty and justice for all!'
(except in California, New York, New Jersey, Michigan, Illinois, Massachusetts, parts of Oregon and WA state, and all of Washington DC)

It's my guess that all the oil producers are in hock up to their necks.

To much supply causes prices to decline meaning they can't pay debt!


There are too many players in the game.

You might even describe it as a bubble bursting
'I pledge allegiance to the flag of the United States of America; and to the Republic, for which it stands, one nation under God, indivisible, with liberty and justice for all!'
(except in California, New York, New Jersey, Michigan, Illinois, Massachusetts, parts of Oregon and WA state, and all of Washington DC)