Trump By a Landslide?

From the desk of; Charles Hugh Smith @ oftwominds.com

Based on this analytic structure, Trump may not just win the election in November--he might win by a landslide.

If we believe the mainstream media and the Establishment it protects and promotes, Trump has no chance of winning the presidential election. For starters, Trump supporters are all Confederate-flag waving hillbillies, bigots, fascists and misogynists. In other words, "good people" can't possibly vote for Trump.

Even cartoon character Mike Doonesbury is fleeing to Vancouver to escape Trumpism. (Memo to the Doonesbury family: selling your Seattle home will barely net the down payment on a decent crib in Vancouver.)

For another, Trump alienates the entire planet every time he speaks.

The list goes on, of course, continuing with his lack of qualifications.

But suppose this election isn't about Trump or Hillary at all. Suppose, as political scientists Allan J. Lichtman and Ken DeCell claimed in their 1988 book, Thirteen Keys to the Presidency, that all presidential elections from 1860 to the present are referendums on the sitting president and his party.

(Lichtman published another book on his system in 2008, The Keys to the White House: A Surefire Guide to Predicting the Next President.)

Author/historian Robert W. Merry sorts through the 13 analytic keys in the current issue of The American Conservative magazine and concludes they "could pose bad news for Clinton." 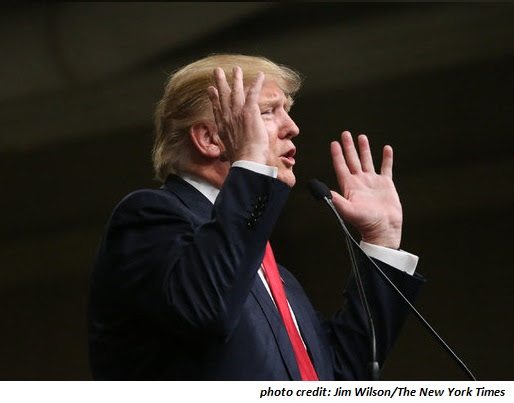 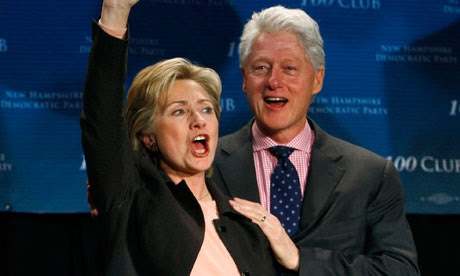 Whether the 13 issues are positive or negative for the candidates is of course open to debate, but consider what it means that Trump won the Republican nomination despite the near-universal opposition of the Establishment.

Consider that some polls found that 68 percent of adults think the country is on the wrong track and a recent average of six polls on the subject concluded that 64% of adults feel the nation is moving in the wrong direction.

This means 2/3 of the nation's adults no longer buy into the Establishment/ mainstream media's narrative that the economy is expanding nicely, things are going in the right direction and Hillary Clinton has a lock on the presidency.

Based on this analytic structure, Trump may not just win the election in November--he might win by a landslide--with landslide usually being defined by an overwhelming advantage in electoral college votes or 60% of the popular vote.

As improbable as this may seem at the moment, consider the improbability of Trump capturing the Republican nomination. Consider the nature of Clinton's support: a mile wide (encompassing the entire Establishment) but only an inch deep.

As I have noted before, there are very few ways left to stick your thumb in the eye of the elitist, predatory, self-serving Establishment that won't get you tossed in prison other than voting against their candidate, which in this election is Hillary Clinton.

Memo to Clinton supporters: if you want to persuade the American public the nation is going in the right direction, you'll have to actually change the direction rather than just promise more of the same.
______________
My new book is #9 on Kindle short reads -> politics and social science: Why Our Status Quo Failed and Is Beyond Reform ($3.95 Kindle ebook, $8.95 print edition)For more, please visit the book's website.

NOTE: Contributions/subscriptions are acknowledged in the order received. Your name and email remain confidential and will not be given to any other individual, company or agency.
---

Despite Trump's negative portrayal in the media, this country cannot take 4 years of Clinton. There's no hope if she wins. That would mean everything is for sale and regular people cannot afford it.

folks are tired of having Osamamuslimism forced down their throats.

What was that slogan Gary Johnson used? "15 dollar and 15 percent."

This thing is going to get so tied up the house will install him..... by the way which one of those bozo's has been to see the cfr yet? Cuz that be the one they pick....
communis error no facit just. A common error does not make law.

Blazer88 said:
Suppose...that all presidential elections from 1860 to the present are referendums on the sitting president and his party.
Click to expand...

Despite this guy's claims Obama's approval rating is on the upswing. More people think he's doing a better job now than at any other time in his presidency, except for the honeymoon period.

Oh darn a graph....it's like blinking lights and clicking noises.......some body give me drugs.....eppppeleeeptic melt down I am at!
communis error no facit just. A common error does not make law.
P

Just shows what a sorry state we are in.

I would never vote for a Clinton. I would sooner vote for Charles Manson or Jeffrey Dahmer. They are more honest and have killed fewer people. Party means nothing. McCain is exactly, no more, no less, a psychopath than Hillary. They are identical. Obama is a psychopath, but he is a puppet and most of his actions follow the hand that is shoved up his ass. He gets to play golf when he is not following his masters' orders.
Politicians understand sound money in the same way that my dog understands my oscilloscope's delayed trigger.

phoneman said:
Just shows what a sorry state we are in.
Click to expand...

And how happy people are about getting rid of him.
---

Call from an old retired friend from IL yesterday. Well....... now that he has some time to see what is really going on he is off the charts pissed. Can't take 4 or 8 years of KILLinton. Economy stinks cuz no one has any extra money to spend to buy my stuff. Kids are working but not doing well, price increases everywhere. It's funny..... in a sad way....... when good people start to wake up and see just how F'ed they really are.
12/26/2020 joe & da ho never take office.

Does anybody actually believe those pole numbers on Obama's ratings?

Uglytruth said:
Call from an old retired friend from IL yesterday. Well....... now that he has some time to see what is really going on he is off the charts pissed. Can't take 4 or 8 years of KILLinton. Economy stinks cuz no one has any extra money to spend to buy my stuff.
Kids are working but not doing well, price increases everywhere. It's funny..... in a sad way....... when good people start to wake up and see just how F'ed they really are.
Click to expand...

THAT right there. If everything is so great why are people financing everything from used cars to kitchen appliances?
My co worker was happily telling us how they just bought a teevee and other related living room entertainment shit using in store credit. I just smiled and nodded like everyone else. Fecking insanity.

.
"And yeah, you're gonna get wet"~ Jeff Williams

Timeline for state run media polling results. They are so blatantly absurd I think it will be easy to predict.
Please feel free to slam the shit out of me if I'm wrong.

Labor Day ~ OMFG it is soooo close Trump closing the gap, almost but not quite tied.

September/Early October ~ Hitlery running away with it. Trump might as well just stay home. Race is over. Stick a fork in it. No way Trump can win, it's going to be embarrassing for him and the morons who follow him.

Mid/Late October ~ Race is miraculously tightening again but hitlery still winning. The state run media has to start making the polls look close to limit the damage done to themselves when they lose. They have no choice. Up until now the objective is to demoralize Trump voters.

"And yeah, you're gonna get wet"~ Jeff Williams

NYTimes Headline Regarding The Presidential Race:

"Hillary Comes In Second; Trump Founders At Next To Last"
"People do not have the right to unregulated rights in this country." -- Al Sharpton
You must log in or register to reply here.
Share:
Twitter Share Link