The number of children born in the United States has hit a 35-year low, new federal data presents, suggesting America could sink to Japan-level numbers not just in capital markets but in a baby bust. The fresh data points to the great likelihood the post-Great Recession decline in births is to stay permanent.
"About 3.75 million babies were born in the U.S. in 2019, down 1% from the prior year," WSJ summarizes of new stats from the Centers for Disease Control and Prevention’s National Center for Health Statistics produced Wednesday. "The general fertility rate fell 2% to 58.2 births per 1,000 women aged 15 to 44." This is the "lowest level since the government began tracking the figure in 1909."
Birthrates were down for all ages and races, especially the teen birthrate which has fallen a whopping 73% since it peaked in 1991, with the exception of women in their early 40s - where there was an uptick - suggesting that couples are waiting longer to start families.

"The total fertility rate — a snapshot of the average number of babies a woman would have over her lifetime — ticked down to 1.7 in 2019, a slight decline from the previous year [of 1.72] and another record low," WSJ continues.
"In almost all years since 1971, that rate has been below the level of 2.1 needed for the population to replace itself, without accounting for immigration."
“Women are still having children,” study co-author and statistician Brady Hamilton said. “They’re just holding off until a later point in time until they establish their education and establish their career.”
Given the economic fallout from the coronavirus pandemic, predicted to last over at least the next few years, the WSJ report forecasts a declining national birthrate similar to the period of the Great Depression. 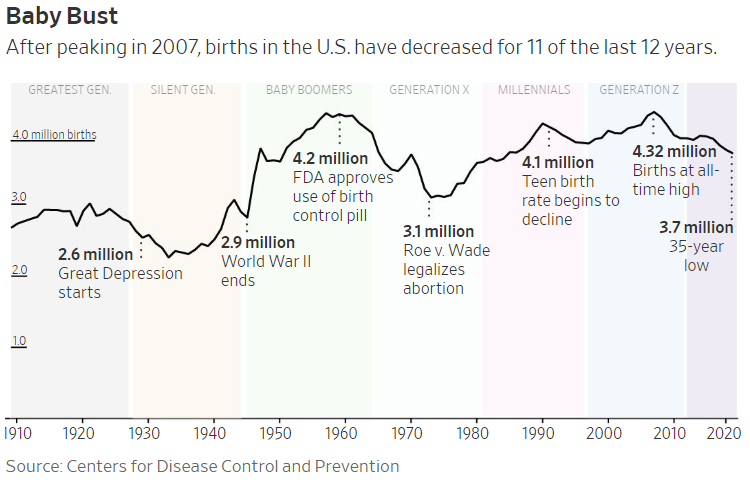 Via WSJ/CDC
On that point, The Hill also underscores that—


Since the recession, the birth rate has risen year-over-year only once, in 2014. Now, demographers tracking the declining birth rate say the trend is beginning to look like a longer-term pattern.
"The fact that births and fertility continued to decline in 2019 despite the booming economy suggests that this is a permanent shift to a lower fertility regime in the U.S.," said Cheryl Russell, a demographer and contributing editor to the journal American Demographics.​
It appears millennials, generally less financially secure than generations before, are on the whole moving much slower in establishing families.

All economic systems are capitalist. The only difference is what the capital is.

AND NINE MONTHS FROM NOW (Feb/Mar 2021) THERE WILL BE A MINI BOOM IN BIRTHS FROM LOCKING PEOPLE UP FOR TWO MONTHS AND NOT LETTING THEM OUT.

Bored people with not much else to do with the time on their hands??

Go ahead, tell me I'm wrong. This happened (black out in NYC) a couple of decades ago.

If humans are bored and cannot get 'out' they do 'other things'...
A rattlesnake in the living room ends all discussion of animal rights.
"Vengeance is mine" sayeth the Lord, but sometimes he subcontracts.
"Peace is that brief glorious moment in history when everybody stands around reloading". T J
When the pin is pulled, MR GRENADE is not your friend.
When in doubt EMPTY THE MAGAZINE.

The accuracy and total non bias status of federal data isn't something I would bet the house
'I pledge allegiance to the flag of the United States of America; and to the Republic, for which it stands, one nation under God, indivisible, with liberty and justice for all!'
(except in California, New York, New Jersey, Michigan, Illinois, Massachusetts, parts of Oregon and WA state, and all of Washington DC)
http://chuckmaultsby.net/id145.html

I wonder how many little black kids will be named corona?
We dont want no trouble

wallew said:
AND NINE MONTHS FROM NOW (Feb/Mar 2021) THERE WILL BE A MINI BOOM IN BIRTHS FROM LOCKING PEOPLE UP FOR TWO MONTHS AND NOT LETTING THEM OUT.

Bored people with not much else to do with the time on their hands??

Go ahead, tell me I'm wrong. This happened (black out in NYC) a couple of decades ago.

If humans are bored and cannot get 'out' they do 'other things'...
Click to expand...
Just what I was thinking !

Governments are NOT in the business of solving problems. Their business is to perpetuate, control and profit from problems. For to solve problems would stifle their growth and power.
TAEZZAR
11 Aug 1969
You must log in or register to reply here.
Share: Twitter Link