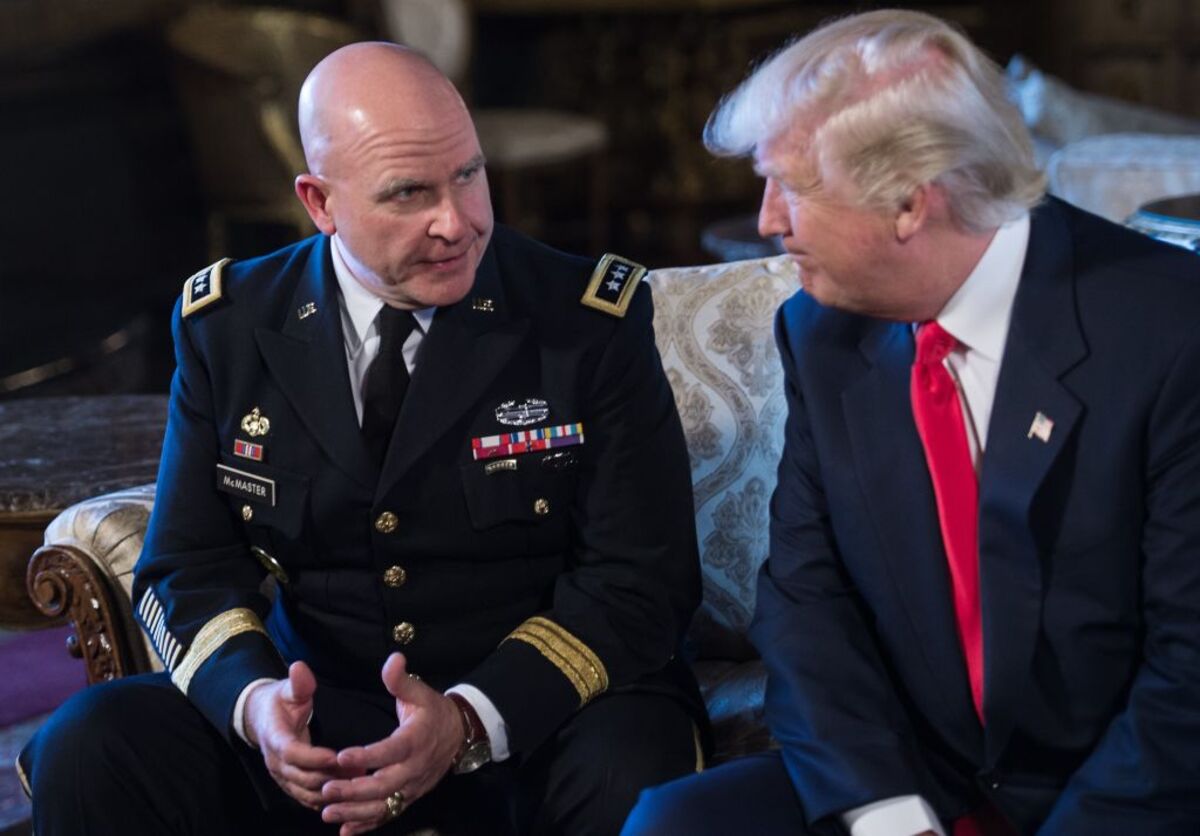 Photographer: Nicholas Kamm/Agence France-Presse/Getty Images
For the Washington establishment, President Donald Trump's decision to make General H.R. McMaster his national security adviser in February was a masterstroke. Here is a well-respected defense intellectual, praised by both parties, lending a steady hand to a chaotic White House. The grown-ups are back.

But inside the White House, the McMaster pick has not gone over well with the one man who matters most. White House officials tell me Trump himself has clashed with McMaster in front of his staff.

On policy, the faction of the White House loyal to senior strategist Steve Bannon is convinced McMaster is trying to trick the president into the kind of nation building that Trump campaigned against. Meanwhile the White House chief of staff, Reince Priebus, is blocking McMaster on a key appointment.

McMaster's allies and adversaries inside the White House tell me that Trump is disillusioned with him. This professional military officer has failed to read the president -- by not giving him a chance to ask questions during briefings, at times even lecturing Trump.

Presented with the evidence of this buyer's remorse, the White House on Sunday evening issued a statement from Trump: "I couldn't be happier with H.R. He's doing a terrific job."

Other White House officials however tell me this is not the sentiment the president has expressed recently in private. Trump was livid, according to three White House officials, after reading in the Wall Street Journal that McMaster had called his South Korean counterpart to assure him that the president's threat to make that country pay for a new missile defense system was not official policy. These officials say Trump screamed at McMaster on a phone call, accusing him of undercutting efforts to get South Korea to pay its fair share.

This was not an isolated incident. Trump has complained in front of McMaster in intelligence briefings about "the general undermining my policy," according to two White House officials. The president has given McMaster less face time. McMaster's requests to brief the president before some press interviews have been declined. Over the weekend, McMaster did not accompany Trump to meet with Australia's prime minister; the outgoing deputy national security adviser, K.T. McFarland, attended instead.

Even McMaster's critics acknowledge that he has professionalized the national security policy process and is a formidable strategist in his own right. Trump credits McMaster with coming up with the plan to strike a Syrian air base last month, which won bipartisan support in Washington.

At the same time, White House officials tell me that in recent weeks, Trump has privately expressed regret for choosing McMaster. Last Monday, former U.S. ambassador to the United Nations, John Bolton, who was a finalist for McMaster's job, met with Trump to discuss a range of issues with the National Security Council. White House officials tell me the two discussed the prospect of Bolton coming in as McMaster's deputy, but eventually agreed it was not a good fit.

The roots of the McMaster-Trump tensions begin in February, when the general was hired after his first meeting with the president. McMaster replaced another general, Michael Flynn. Both Vice President Mike Pence and Priebus supported getting rid of Flynn, after they alleged he misled his colleagues about conversations with the Russian ambassador.

Trump himself has defended Flynn publicly. The two shared a bond from the campaign trail, where they often discussed sports and movies during long evenings on the road. For a president who puts so much value in personal relationships and loyalty, Flynn's departure was a blow.

In this sense, McMaster came into the job with one strike against him. He has accumulated more. The first conflict between McMaster and Trump was about the major speech the president delivered at the end of February to a joint session of Congress. McMaster pleaded with the president not to use phrase "radical Islamic terrorism." He sent memos throughout the government complaining about a draft of that speech that included the phrase. But the phrase remained. When Trump delivered the speech, he echoed his campaign rhetoric by emphasizing each word: "Radical." "Islamic." "Terrorism."

Then Trump's inner circle began clashing with McMaster over personnel. This began with Ezra Cohen Watnick, who remains the senior director for intelligence at the National Security Council. McMaster initially sided with the CIA and wanted to remove this Flynn appointee from his position, but eventually McMaster changed his mind under pressure from Bannon and Trump's son-in-law, Jared Kushner.

That dispute was followed by a bigger one. Bannon and Trump, according to White House officials, pressed McMaster to fire a list of Obama holdovers at the National Security Council who were suspected of leaking to the press. The list of names was compiled by Derek Harvey, a former Defense Intelligence Agency colonel who was initially hired by Flynn. McMaster balked. He refused to fire anyone on the list and asserted that he had the authority to fire and hire National Security Council staff. He also argued that many of these appointees would be ending their rotation at the White House soon enough.

And finally, the White House chief of staff himself blocked McMaster this month from hiring Brigadier General Ricky Waddell as his deputy, complaining that McMaster failed to seek approval for that pick. McMaster had asked his inherited deputy to leave by May 10; she is now expected to stay on for the time being.

For now the White House is saying the president and his national security adviser are in sync. Trump said in his statement to me that he couldn't be happier with the general. Of course, White House counselor Kellyanne Conway assured the public in February that Trump had full confidence in McMaster's predecessor. Only a few hours later, he was forced to resign.

I was not enamored with those pushing Mcmasters or himself, I believe him to be a closet dem.