Why the U.S. stock market now has scary parallels to 1929

Opinion: Why the U.S. stock market now has scary parallels to 1929

Worst is yet to come for investors, strategist predicts 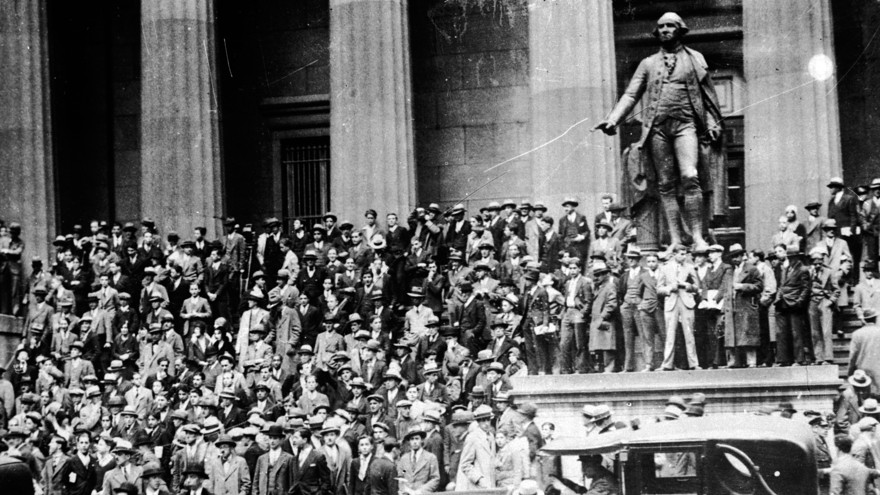 Getty Images/Keystone/Staff
Huge crowds outside the Sub Treasury Building (now Federal Hall National Memorial) and the statue of George Washington, opposite the Stock Exchange, New York, at the time of the Wall Street Crash, October 1929.
Russell Napier is a stock market historian who sees bad things coming in the near future, and an old-style solution for investors looking to push through.

Author of “Anatomy of the Bear: Lessons from Wall Street’s Four Great Bottoms,” Napier has studied extensively what goes into a decline that takes U.S. stocks into bargain-basement territory. The four great market bottoms — and his definition excludes the financial crisis of 2007-08 — occurred in 1921, 1932, 1949 and 1982.


In an interview for my radio show, MoneyLife with Chuck Jaffe, Napier said that he expects his book will soon require an update to cover a “fifth great bottom” — the one he sees coming in the months ahead.

How to build an all-weather portfolio
(5:07)
Financial advisor Dan Wiener invests 70%-80% of long-term client portfolios in stocks, with the remainder in bonds and cash. When the market fell, he added to funds that had been hit hardest.

Current market conditions, Napier noted, echo 1929, though he said that he does not expect the massive declines that ended the Roaring 20s and started the Great Depression.

Rather than focus on the size of the losses, Napier — who has covered global markets for institutional investors for two decades — says the similarity lies in the root cause of the downdraft.

“The reason I see similarities is that [1929] was clearly caused by deflation, it emanated from a flaw in the construction of the global monetary system. It began in emerging markets from 1927 to 1929 and was evident there and then was imported to America and began to erupt in the United States,” Napier explained. “The pain in emerging markets for the last few years is reminiscent … the decline in equities should not be as gross [as in 1929] … [because] equities are not as egregiously overvalued.”

Napier is far from alone in calling for a protracted market downturn and a scary worsening of conditions that have gotten markets off to such a miserable start in 2016. In fact, it’s easy to find financial advisers and fund companies either calling for trouble and/or warning investors to protect themselves.

What typically follows that warning is a pitch for alternative funds, which use modern tricks of the trade to reduce volatility, avoid losses, beat the market or turn profits in all conditions.

That pitch sells well, but typically has under-delivered. The jury is still out on most forms of alternative fund — they haven’t been around long enough to prove that they work or to confirm that the concept doesn’t translate to a consistently above-average fund.

Napier, for one, is skeptical that alternatives can work, noting that he’s cautious about any fund that loads up on derivatives, worried about the implosion potential when something goes wrong.

That leads him to a different kind of alternative choice for investors looking to ride out the trouble he is forecasting, specifically a fund manager with flexibility.

“The product that people should be looking for is simply a multi-asset product,” said Napier, who despite his misgivings about the market says he is always somewhat invested in equities “because I could be wrong.”

He added: “This multi-asset product — which is a fund manager who can buy for you bonds, cash, gold, and equities, and doesn’t have to get into anything too esoteric — is something that was fairly common in our financial history, but it’s something which is reasonably uncommon today.”

That’s precisely what investors were buying when mutual funds started 90-plus years ago. Managers could go anywhere and do just about anything. Investors wanted professional management at a reasonable cost; they let managers make decisions about allocating money based on market conditions.

The evolution of the ratings companies, however, created problems for go-anywhere funds. They were hard to categorize and measure, often defying the descriptive categories they were lumped into.

Couple that with investors and advisers who wanted to control allocation choices, and star managers — household names like Peter Lynch — became nearly extinct. Those who remain, such as Jeffrey Gundlach of DoubleLine and Bill Gross of Janus, either work in an area without limits (like unconstrained bond funds) or run a niche or sector fund.

“Find a [multi-asset] manager with a good track record … who has just been in, basically four, five or six fairly simply asset classes and hasn’t had to resort to anything too esoteric [like derivatives],” Napier said.

That’s easier said than done, but diversifying a portfolio by adding a component where a pro has control might be the right alternative for an investor looking to hunker down against a coming bear market.

looks like equities will continue to do well as long as the usd remains high, and the usd will remain high as long as rates are positive. on the other side, the high usd hurts actual sales, so we'll see some bizarre high pe ratios as the world rushes to park their money in the usa for safety.

earplugs said:
looks like equities will continue to do well as long as the usd remains high, and the usd will remain high as long as rates are positive. on the other side, the high usd hurts actual sales, so we'll see some bizarre high pe ratios as the world rushes to park their money in the usa for safety.
Click to expand...

Pe ratios are high now, most stocks are trading at 2x what they should be, the only thing undervalued are real things with tangible value like commoditites, save oil which is being pumped to shit again by tptb

I've seen a number of articles similar to this one and all I can think is that this is not now nor will be, your father's depression. The 1929 depression will look like a day at the park compared to what the globe is stepping into now.
Orthodox Jedi
Make mine a vodka and vicodin latte.

Alton said:
... The 1929 depression will look like a day at the park compared to what the globe is stepping into now.
Click to expand...

Agreed. The savvy ones who are diversified in (phys) PMs will be the best positioned when all the bubbles start popping.

skychief said:
Agreed. The savvy ones who are diversified in (phys) PMs will be the best positioned when all the bubbles start popping.
Click to expand...

Which is why the majority of us keep stacking it high.
Last edited: Mar 6, 2016
'I pledge allegiance to the flag of the United States of America; and to the Republic, for which it stands, one nation under God, indivisible, with liberty and justice for all!'
(except in California, New York, New Jersey, Michigan, Illinois, Massachusetts, parts of Oregon and WA state, and all of Washington DC)