WI: Madison Gun Turn in "Buy Back" gets One Gun Madison, Wisconsin had a gun turn in event last weekend. This type of event is also known as a gun "buy back", which is a propaganda term designed to get people used to the theory that all guns (property) belongs to the government, and that anything the government takes, it is simple taking "back". The guns at these event, in 99.9% of the cases, never belonged to the government.

This event turned out to be a bust. Only one gun appears to have been turned in. Statistically, in Wisconsin, it was likely a broken single shot shotgun or an old .22 rifle. A couple of years ago, in Milwaukee, another turn in event brought out a lot more guns and private buyers to compete with the police. I have not found reports of private buyers at the Madison event.

Academics have routinely found that the turn in events do not produce useful results, and likely are a waste of police resources. From the Freakonomics" web site:

When it comes to gun buybacks, both the theory and the data could not be clearer in showing that they don’t work. The only guns that get turned in are ones that people put little value on anyway. There is no impact on crime. On the positive side, the “cash for clunkers” program is more attractive than the gun buyback program because, as long as they are being driven, old cars pollute, whereas old guns just sit there.This is from 2009. It is not particularly unusual; academic studies are in agreement that gun "buybacks" do not reduce crime, and that police resources used for them could be better spent elsewhere.

In 2000, academic Garnen Wintemute had a definite opinion about gun "buy backs".

`The continuation of buyback programs is a triumph of wishful thinking over all the available evidence.' -- Garen Wintemute, director of the Violence Prevention Research Program, referring to evidence that gun buyback programs did nothing to reduce gun-related crime in several major U.S. cities.Many Second Amendment supporters have said that the "buy backs" are not about reducing crime, but are used as street theater to promote gun control policies. I have written that the purpose of "buy backs" is to teach people that guns are bad and should be turned in to the police. Garen Wintemute has changed his thinking a bit, 13 years later, and admits that the propaganda use of "buybacks is the most important part of the program.​
From governing.com:

“They have intangible value that we have really been underestimating,” he says. “They never will reduce rates of violent crime, but that may have been the wrong parameter to look at.”As part of a larger discussion about public safety, Wintemute says, buybacks may play an important role in mobilizing a community to examine gun control.That seems to be the only real purpose of the Madison turn in "buy back".​
From nbc15.com:

"The event today is designed save youths. These young ladies right here need to grow up without getting shot, without getting shot, without worrying about their mom, dad being shot. It's too much senseless violence and mainly in the black community," Maymon said. ​
Madison police collected at least one gun as a result of the program and they also passed out free gun locks to registered gun owners.

From Scott L. Schable in the comments:


Wisconsin does not require registration of all firearms, and cities cannot force registration. Cities have never owned the firearms, so the "gun buybacks" are a scam, so it needs to reported that Madison and other cities don't want to enforce the gun laws, and just make the sanctuary cities for criminals and gangs.We may never know if there were any private buyers at the Madison event. Private buyers destroy the propaganda value of the message that "Guns are bad, turn them in to the police." The private buyers send the message: Guns are useful, sell them to us for more than you will get in this silly government program.​
Wisconsin has become a gun friendly state, with large numbers of peaceful, responsible, gun owners.

©2016 by Dean Weingarten: Permission to share is granted when this notice is included.
Link to Gun Watch

Around here, the cops tend to hide the dates, too many guys with broke crap guns show up...I'm trying my best to get a shit gun to turn in
Suck it Buttercup, we will be as loyal to Trump as you were to Obama...

Goldhedge said:
Only one gun appears to have been turned in. Statistically, in Wisconsin, it was likely a broken single shot shotgun or an old .22 rifle.
Click to expand...
I thought it was this one: 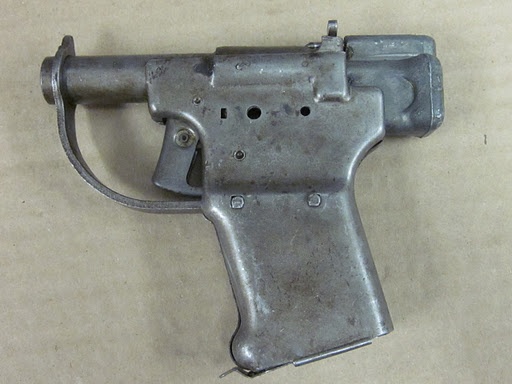