While the source should not be surprising, perhaps the data they put out on Jan. 25 is. And that is because investing in gold over the past decade has not only proven the mainstream wrong (including Warren Buffett), but out of all the possible low risk investments since the 2008 financial crisis, gold has been at or near the top of the list. 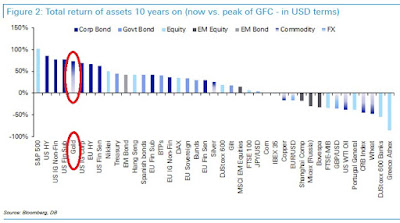 Now we are not talking percentage of returns of course, as stocks easily have it beat thanks to central bank interventions in the equity markets, but overall in the sector of low risk and risk free assets, gold even today remains close to a 90% return over the past decade. 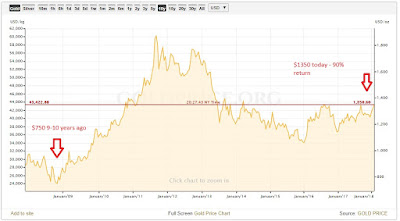 Since 2001, investment demand for gold worldwide has grown 18% per year, on average. This has been driven in part by the advent of new ways to access the market, such as physical gold-backed exchange-traded funds (ETFs), but also by the expansion of the middle class in Asia, and a renewed focus on effective risk management following the 2008–2009 financial crisis in the US and Europe.

Today, gold is more relevant than ever for institutional investors. While central banks in developed markets are starting to normalise monetary policies – leading to higher interest rates – we believe the effect of quantitative easing and the prolonged period of low interest rates can have a long-term effect. These policies may have fundamentally altered what it means to manage portfolio risk and could extend the time needed to meet investment objectives. In response, institutional investors have embraced alternatives to traditional assets such as stocks and bonds. The share of non-traditional assets among US pension funds has increased from 17% in 2006 to 27% in 2016. Many investors are drawn to gold’s role as a diversifier – due to its low correlation to most mainstream assets – and as a hedge against systemic risk and strong stock market pullbacks. Some use it as a store of wealth and as an inflation and currency hedge. As a strategic asset, gold has historically improved the riskadjusted returns of portfolios, providing returns while reducing losses and providing liquidity to meet liabilities in times of market stress. A source of returns Gold is not only useful in periods of higher uncertainty. Its price has increased by an average of 10% per year since 1971, when gold began to be freely traded following the collapse of Bretton Woods. - Interest