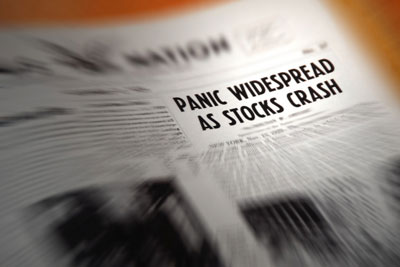 September 11, 2001. I was on the F train going from my home in Brooklyn to my Manhattan office. When I got in, someone told me one of the towers had collapsed. People were crying — their friends were in those towers.

My office was uptown on Park Avenue about three miles from where the planes had hit. Was another plane coming to hit us too?

I don’t panic in these kinds of situations. Since the markets were closed, I left the office, went to an ATM and took out as much money as I could. Then I started walking to a friend’s house to call my mom to let her know I was OK.

I’ve been on my own from the time I was a kid in India — boarding schools until I was 16 and then leaving my family at 18 to come to the U.S. for college. When you’re on your own, it teaches you to deal with tough situations … and how to make decisions under stress.

Growing up this way has helped my investing. I don’t panic in extreme situations, and that’s helped me make money when others lose money … like in the crash/bear market in 2008 and the one that happened between 2001 and 2002.

Terror is striking our markets again. Right now, we’re recovering from the worst start to a year ever. Are our markets are safe? I have the indicator that you should be watching to help answer that question…

Well, I can’t guarantee it, but I believe that our markets are safe today. Why?

When you’re a big-time money manager as I was — managing a $5 billion hedge fund and overseeing billions more — you must have confidence based on your understanding of what’s going on in the market and what’s going to happen next.

After all, the future is always unknown. But if you have the right tools, you have a good shot of anticipating how things are going to unfold … and that gives you the confidence to make your bets.

One tool you need in your toolbox is something that can tell you if markets are crash-y. Something you can look at when things are going crazy to separate facts from emotion and perception from reality.

This week, I’m going to go over a tool … one that I use to figure out if markets are crash-y. And this tool is the reason why I’m not worried about the terror attacks in Brussels crashing our markets.

When the VIX Soars, Stocks Crash
When I’m looking at the overall stock market to figure out if markets are crash-y, I base my analysis mostly on what’s going on with the S&P 500 Index. The S&P 500 is the most widely known index, or basket of stocks, on earth. It’s what people mean when they refer to “the market” in the United States.

We’re trying to figure out if the stock market is crash-y — meaning, will the price of the S&P 500 take a sudden fall? Obviously, we want to figure this out before it happens. To do this, you have to find the S&P 500’s nemesis.

By nemesis, I mean something that shows you the other side. Think of Batman versus the Joker or Superman versus Lex Luthor.

The S&P 500’s nemesis is the CBOE Market Volatility Index, or more commonly known as the VIX. When the VIX soars, markets crash.

In a very simple way, the VIX tells you what traders are willing to pay for out-of-the-money S&P 500 put options.

People buy out-of-the-money put options when they are worried that the stock market is going to crash or, at the very least, go down a lot. The puts offer protection.

Let’s look at an example to make this easy for you to understand. Say the S&P 500 is at the 2,000 level. You’re a big money manager and you’re worried that the market is going to crash. You start buying S&P 500 put options at the 1,600 level, or 20% below the current level.

Now, if the market crashes 50% like it did in 2008, the value of this option soars higher, effectively offsetting the losses in your portfolio after the first 20%. In short, you’ve bought crash insurance.

For our purpose today, you can think of the VIX as the index that tells you the price of crash insurance for the stock market.

My experience — built over 20 years of hands-on trading and managing a $5 billion hedge fund — is that when the VIX index is low but steadily rising … that’s bad. Often, it’s a sign that a crash is coming. Or a bear market.

You can see this same behavior for market crashes since the VIX was created in 1989. VIX low and rising is an early-warning CRASH ALERT indicator.

Smart Money Buying Cheap Insurance
Here’s why this indicator works. When you see the VIX at a low level but it keeps rising, it means that smart money is buying up crash insurance when it’s cheap because it sees the rising likelihood of a crash. As they buy, they bid the price up a bit, which in turn pushes the VIX higher.

Of course, as the market crash hits, the dumb money comes to buy crash insurance at any price, sending the VIX soaring higher to crazy levels.

Bottom line: The best indicator by my 20 years of money management of a coming crash is a VIX at a low level that’s steadily rising. That’s because it’s telling you that the real smart-money folks are buying up crash insurance in anticipation of a crash.

Crash Alert Warning
So how are things looking today in 2016? Is the VIX about to soar? Are markets about to crash?

Take a look at what our Crash Warning Alert system is telling us now.

You’ll see that the VIX soared in mid-February, and sure enough, the market suffered a mini-crash, dropping by around 11%. Since then, the VIX has reversed course and is at a low level. So, there’s no Crash Warning Alert right now.

Remember, we need the VIX to be at a low level AND rising steadily for it to trigger our Crash Warning Alert.

I understand that most of you aren’t going to be able to do this at home; so that’s a good reason to check back in with me. I’ll let you know when the VIX is signaling a Crash Warning Alert. And I’ll give you a heads up that a crash could be coming.

Since 1998, The Sovereign Society has been at the vanguard of the pursuit for personal liberty and free markets. We enthusiastically support the enduring pursuit of freedom and prosperity, and, to that end, we believe in empowering individuals to make educated investment choices.

Through the years, we have assembled a talented and deeply experienced team of analysts, editors and researchers who understand that the best investment and wealth-protection opportunities in any market are often hidden. And our approach has led to a great degree of success.

Our independent, uncompromised research has predicted some of the biggest financial catastrophes in recent memory. We were one of the very first financial research firms to warn investors about the dangers in the derivatives market and the threat they posed to the global financial system. We also alerted our readers about the dollars crisis of 2004-2005, the meltdown in the private-equity markets in 2007, the collapse of Lehman Brothers in 2008, and we’ve been sounding the alarm bells about the European debt crisis since early 2010, long before the mainstream media started paying attention.

In an age when our personal and economic freedoms are being curtailed like never before, our work has never been more important, and our voice never more indispensable. That’s why we remain steadfast in our mission of scouring the globe for investment opportunities that can only be unearthed by our exhaustive, “boots-on-the-ground” approach.

With a daunting economic era ahead of us, our purpose is providing our subscribers with the unvarnished truth in an industry filled with artifice and obfuscation. We realize that a world of investment opportunity exists in stocks, commodities, currencies and asset protection that are often overlooked. Our mission is to bring them to you each day.