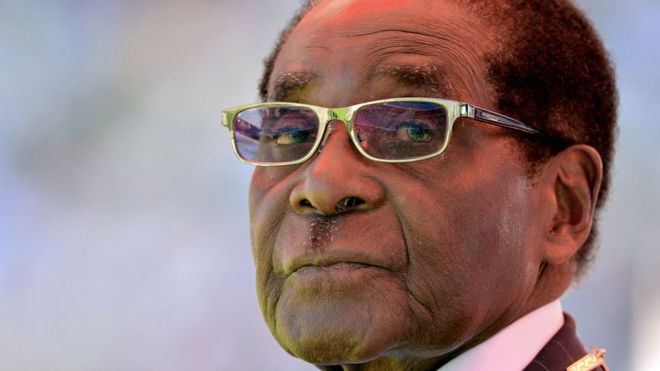 He died after battling ill health, his family confirmed to the BBC. Mr Mugabe had been in hospital in Singapore since April.

He was ousted in a military coup in November 2017, ending three decades in power.

He won Zimbabwe's first election after independence, becoming prime minister in 1980. He abolished the office in 1987, becoming president instead.
Mugabe's early years were praised for broadening access to health and education for the black majority. But his controversial land reform programme sparked an economic collapse and his latter years were marked by rights abuses and corruption.

He was imprisoned for more than a decade without trial after criticising the government of Rhodesia in 1964.

In 1973, while still in prison, he was chosen as president of the Zimbabwe African National Union (Zanu), of which he was a founding member.

Location
Just behind you.

Basically... the fucker got away wit it.
Cheers
Z

Politicians and economists use statistics in the same way that a drunk uses lamp-posts – for support rather than illumination. - Andrew Lang
F

An incompetent leader...
Free America from the real Welfare Queen...Israel.
Free Palestine, give it back to the people who don't need welfare.
Boycott Israel, FREE America. BDS, learn it.

Hopefully he is paying for his crimes and despicable actions in the afterlife.
"No man's life, liberty or property are safe while the legislature is in session." -- New York State Surrogate Court Judge Gideon John Tucker, Final Accounting in the Estate of A.B._, 1, Tucker (N.Y. Surrogate Court) 247, 249 (1866)

An African dies half way around the world and I couldn't care less. The guy never sent me so much as a Christmas card!

Look up 'The Greatest Story Never Told'- We've been lied to all along!
https://www.impartialtruth.com/adol...tiPSOD_NgC7jycrRJ1GsLfeMHw61x3RfDlqiT_IP81uUg
The truth shall set you free! The worst thing you can do is fear it!
Hellstorm:
https://www.bitchute.com/video/17nypWABfsmu/

"What? The land of the free? Whoever told you that, is your enemy.." Rage Against The Machine

GH you may delete my thread.

I don't personally know of anyone that will miss him.

Time to FACE THE MUSIC Robert. Was it all worth it?

Mugabe's early years were praised for broadening access to health and education for the black majority. But his controversial land reform programme sparked an economic collapse and his latter years were marked by rights abuses and corruption.
Click to expand...
"Land reform?"

It was outright theft. Period.

WTF. Talk about sucking up and revisionist history.

Wonder which poor fecker is diplomat there?

Must have done something real bad.

Golden Regards
Uncle
That commitment to devoting yourself to the art of the 6 string is the price you pay for the payoff of staying young your whole life. - Apocalypto
You must log in or register to reply here.
Share: Twitter Link